My interest in interactive documentaries (i-docs) and transmedia storytelling has immensely grew since the past two years. Part of this interest came from the new opportunities offered to me – as photojournalist – to tell stories in a different way. I needed to put more context into the stories and issues I was covering. I needed to explain things in an engaging way.

Back in january 2010, I was watching CSpan – a public channel in the U.S covering exclusively politics – when I heard for the very first time about the Citizens United vs F.E.C ruling. A very disturbing decision by the Supreme Court which held that the First Amendment prohibited the government from restricting political expenditures by corporations and unions. To me the implications of such decision were absolutely incredible. In short, corporations could spend unlimited amount of money to support their preferred candidate. To me, it was legalized corruption.

I decided then to work on that story, and almost 2 years after the facts, Jean Nicholas Guillo – my co-author – and I are proud to give you a first look at “Moneyocracy“.

The story takes its roots in the 2010 Citizen United vs. F.E.C. Supreme Court ruling and analyses its consequences on U.S elections and on the American population.

What are the legal & political implications of this decision? Is this the beginning of a new era in which corporations will shape the political arena as they shape their businesses ? The project focuses on the rise of Super PACs and their affiliated organisations the 501c4, and documents how these organisations influence the political debate and American voters during the 2012 presidential campaign and beyond through political advertising. 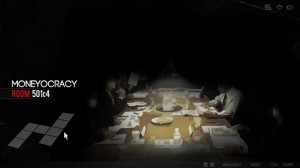 Moneyocracy relies on an interactive documentary (i-doc), a documentary and a comic book, each of which explore a specific issue, allowing the viewers to discover the real influence of corporate money in contemporary elections. The journey takes the audience from Washington D.C to Chicago at the Obama campaign headquarters, to Tampa, FL to Charlotte, NC, during the GOP and Democratic National Conventions. Along the way, the authors interview some of the main actors of the campaign, including lobbyists, unionists, activists and lawyers, all of whom reveal the true consequences of the Supreme Court’s historic 2010 decision. For more, don’t hesitate to visit our website www.moneyocracy-project.com.

I don’t want to spoil the interest on this part, but we’ve faced numerous challenges when we crafted the mockup of ROOM 501c4 (the i-doc).
The idea was to explore the role of the 501c4s which are special groups able to raise money without having to disclose the name of their donors. Which means that foreign entities and governments can give money to support a U.S candidate ( like the candidates for the Presidential election) in total secrecy.

How could we communicate that atmosphere of secrecy? How could we engage an audience who’s not particularly involved in the democratic debate? Was it possible to make clear the moral implications of big money during the elections? 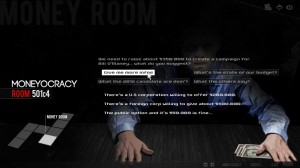 We’re heading to the “Serious gaming” solution as it seems to us that the fictional layer can give us more freedom and tools to engage the audience. The interface, the story and the characters you’ll meet in the i-doc will all support this idea of secrecy when the documentary material ( videos, datas and photos ) will support the story by their factual meaning.

By the way, I’m really curious to know what’s your thoughts about the use of serious gaming for a news or documentary project. There’s a lot of ethical questions here, we’ve tried to answer them all, but I’m sure you’ll have very pertinent remarks on that matter.

Another aspect of “Moneyocracy” relies on our desire to get people involved in the project very early. Along the traditional Facebook page and Twitter account where we’ve started a conversation about the “Citizens United” issue, we’ve set up a crowdfunding campaign on kickstarter.

Every week we’ve planned to create a unique Facebook Timeline cover photo that fans can use to show their support of the project. Fans are super welcome to create their own and to post it on our wall of share it with us. We also have a great artist working closely with us who will provide original art to support the project. Twitter is used as a news feed and a communication tool to reach the audience. The crowdfunding campaign has to goals: The first one is to create a deeply committed community around the project, second one of course is the obvious one: raising money to make the project happen. These strategies will be improved and completed as the time goes on, we truly believe that an healthy project is based on a vibrant community.

I can go on and on about “Moneyocracy”, those among you who are interested in the story check out the wiki about Citizens United vs F.E.C, this is great ressource to understand what’s at stake. You can also like our facebook page ( facebook.com/moneyocracy ) I’ll be in Bristol this week for the symposium, so if you want to know more about the project, chat about interactive documentaries or share a coffee, I’ll be happy to meet you in person.

I let you here with our video presenting the project. See you in Bristol!

My interest in interactive documentaries has grown more than ever in the...